“The ephemeral is a God, as polymorph as its name.”
Louis Aragon 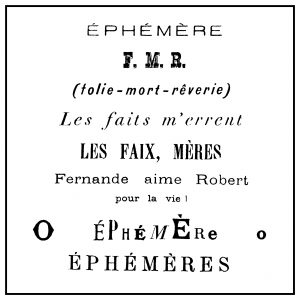 Louis Aragon was one of the leading figures of the surrealist movement in the 1920s, and describes the ephemeral in his novel Le Paysan de Paris (Paris Peasant) that was published in 1926 as a phenomenon bursting with illusion. Aragon experienced a city engulfed in constant change on his walks through the streets of Paris in the 1920s, thus offering the ideal environment for a fascination of the transient and the fleeting. Ephemeral. Those “few syllables that sound like a legend inhabited by green, imp-like eyes”  and withdraw from any illusions of permanence. The second line of this onomatopoetic approach (fig. above) breaks down the term to a minimum and thus the typeface becomes equally fleeting. F.M.R. Today, almost 100 years later, these three letters become the title of a new format – LINZ FMR.

LINZ FMR is a platform, maybe even a form of festival, that is pronounced LINZ EPHEMER. The phenomenon that was described by Aragon as full of transience in his many plastic images, is at the same time a basis, a work instruction, and an exit strategy in the confrontation of art in a digital context and in public space. Over the course of four days the works of 18 artists will be shown on the extensive Donaulände in Linz, and different approaches to process and structures investigated.

The adjective ephemeral has its roots in the Greek word ephemēros, which roughly means alive for only one day, and describes something that does not last for long, that is of a transient and fading nature. LINZ FMR is a format for artistic processes and positions that reflect the ephemeral nature of this digital and connected present. The ever advancing digitization of the every-day implies intense overlapping and layering of familiar physical, but also finely interwoven digital spaces. In these fast paced multi-dimensional structures the last bastions of clear descriptions of medium and discipline have begun to dissipate within artistic work.

Thus discourses surrounding new approaches to media and internet art led to seemingly idiosyncratic micro-genres such as Post Internet Art, New Aesthetic, or New Digital Art; but even subcategories can only function as fleeting snap shots within the context of a contemporary discussion of art in a digital context. Factors such as the omnipresent connectedness or the way of dealing with ostensibly unlimited access to information only underline the ephemeral characteristics of artistic production. The levels of meaning bow to the speed and fleeting nature that the structures of production, but also the reception bring along with them.

Hartmut Rosa dedicates the preface of his reflections on unavailability (Unverfügbarkeit) that was published in late 2018 to the meteorological phenomenon snow: “snow is practically the purest manifestation of unavailability: we cannot produce it, we cannot force it, we cannot even plan on it to a degree of certainty, at least not over a longer period of time”, says Rosa. Snow is ephemeral. “We cannot possess snow, we cannot make it our own: by taking snow into our hands it but melts and runs through our fingers, if we take it into our houses it melts, if we put it into the freezer it ceases to be snow.” We try to counter this with complex machines called snow cannons, according to Rosa.

It is artificial interventions such as this that are central to LINZ FMR. A snow cannon aims to reproduce natural phenomena. This leads to incisions and breaks; ecological cycles and cultural artifacts overlap more and more and undergo temporary symbioses, in an attempt to fulfill the wish for predictable availability. Yet even at its most complex, artificial snow remains ephemeral in its foundation. This leads to technically stretched out forms of transience that stand in direct tension with the basis of ecological structures, and yet remain fleeting for the time being.

However, dealing with such processes is not something that remains entirely theoretical at LINZ FMR. Due to the selection of the park along the Danube as an exhibition space, these thoughts are also transferred to the active conception and production processes. Innumerable factors within ecological cycles are ephemeral and at the same time represent a thinking in long terms in their entirety. In addition, the spacial frame is one of a hybrid character in which nature is held in place artificially – like the use of Rosa’s snow cannons, the creation of a park means the overlap of what is natural and what is artificial. This multi-layered space offers a stage and display for contemporary and therefore digitally influenced forms of transience.

LINZ FMR 19 is a reflection on a spacial actuality, without negating the constant overlapping with what came before. It is not only the natural or the cultural histories, but also the art historical breaks that define a space. On the extensive area there are ten sculptures to be found that were set up during the exhibition Forum Metall in 1977 and the following year, and now form and define the park. In the frame of LINZ FMR 19 we will see an actualization of the definition of the term sculpture also within the context of this historical ensemble. The massive and durable works from the 1970s are carefully enveloped with the present, without directly referencing them.

LINZ FMR wants to offer a frame, a temporary stage to the present, and set the scene for artistic process to test its ephemeral character. LINZ FMR overlaps and overlays chronological as well as material levels. LINZ FMR will disappear again, thereby leaving a lasting impression; or to finished by coming back to Aragon: